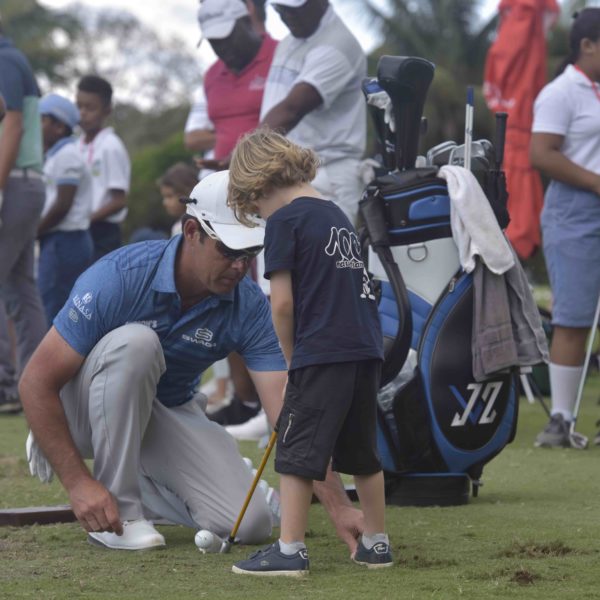 The large group of young Mauritian golfers who attended a clinic with the professionals competing in the 2018 AfrAsia Bank Mauritius Open showcased again the phenomenal growth of this tournament and the role it is playing in the development of the game on the Indian Ocean island.

The young golfers from the Mauritius Golf Federation (MGF) joined a selection of professionals from the Sunshine Tour, Asian Tour and European Tour – who tri-sanction this event – on the practice range at the Four Seasons Golf Club Mauritius at Anahita on Saturday.

“The interest in golf amongst the young people on the island is really building up,” says Christophe Curé, President of the MGF.

“We have a Golf for All project that we run on the island and it’s helped the sport to really grow here, which has been the goal of the MGF. We are focused on growing the game amongst juniors.”

The AfrAsia Bank Mauritius Open has fulfilled a key aspirational role in this growth as more and more young Mauritians are introduced to a game showcasing talented young athletes from around the world enjoying careers as professionals.

And it’s also given them a glimpse of what is possible, with some of the biggest names in golf having played in the AfrAsia Bank Mauritius Open over the past four years, including Major winners Ernie Els, Darren Clarke and Louis Oosthuizen, 2018 European Ryder Cup captain Thomas Bjørn, and a myriad of former Ryder Cup and Presidents Cup players as well as multiple Sunshine Tour, European Tour and Asian Tour winners.

“The tournament is really becoming quite popular on the island and drawing more and more Mauritians to come and watch,” says Curé, who identifies young amateur Pierre Pellegrin as an example of how it’s helping to develop the local game.

Pellegrin played in the tournament for the first time this year as the country’s top amateur golfer. Like most young Mauritians his sport of choice used to be football and he went for trials in France. But an injury made him turn to golf, and he hasn’t looked back. Although he missed the cut in this year’s AfrAsian Bank Mauritius Open, he remains an inspiration for the many young golfers who attended the clinic.

“Pierre only started playing golf about four or five years ago after his football injury, so he has progressed really quickly. This was his first time playing in a professional tournament so I think he was a bit nervous. But the experience will be good for him and will help him grow his game in years to come,” says Curé.

And that’s exactly what the AfrAsia Bank Mauritius Open hopes to do going forward as it grows not only what the sponsors refer to as “Brand Mauritius”, but also exposes young Mauritians to a brand new sport and a world of possibilities.